It may be only be six weeks after New Year’s, but already both the state of North Carolina and Wake County have grave concerns about filling the needed teaching positions for next school year.

And so they should.

North Carolina often fills positions from teachers in states like Ohio and New York where turnover is low and teachers can’t find positions. However, with no more pay for advanced degrees in NC, most of those candidates will likely no longer be coming here anymore.

Besides needing to attract teachers, there’s the issue of teacher turnover. NCDPI was concerned enough about this very issue to send a report to the General Assembly. You can read the whole report here, but I’ve compiled a few highlights:

The concerns the data raise are only the tip of the iceberg for what I feel is impending, based on my front-row view from the classroom trenches.

For example, of significant note but not yet reflected in this report is the fact that in Wake County alone, the number of teachers who have left specifically to teach in another state have already doubled so far this year from this data last year.

Also consider this year so far this blog has included:

None of these facts are reflected in the reported data. Yet.

And then, this week a teacher raise for only new teachers was proposed. This conversation, which I’ve been given permission to share with you, should give you some insight into the morale and mindset of North Carolina’s teacher leaders:

These are some of the best educators in North Carolina classrooms from all over the state. And although I can personally vouch for their exceptionalism as educators, I am certain these sentiments are not exceptional. Conversations like this one are happening on every facebook wall and in every teacher lounge in the state. 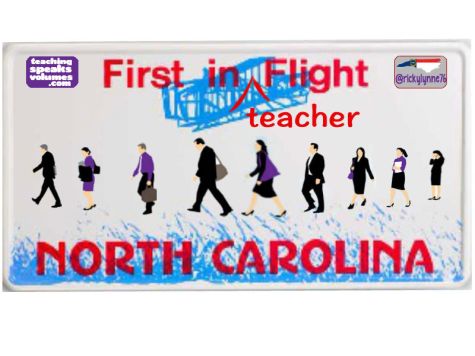